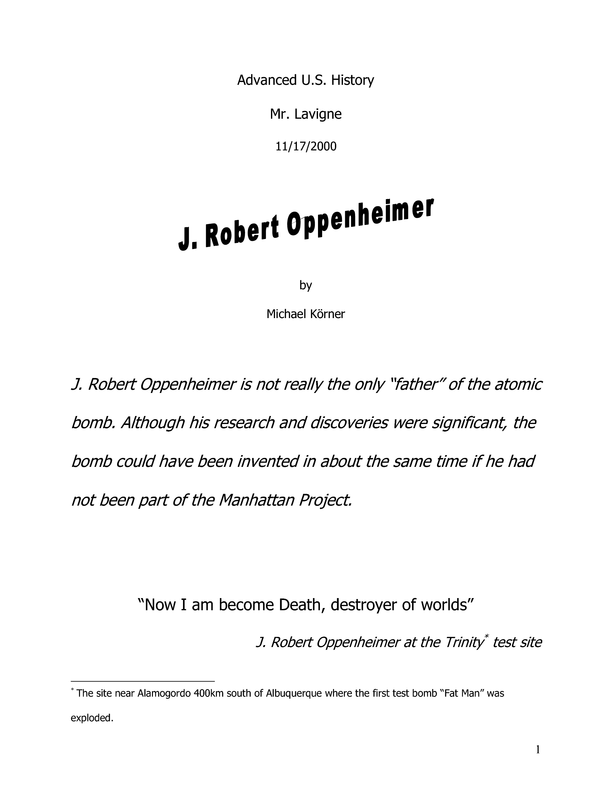 1. Life, education and ancestors of J. Robert Oppenheimer until the point he joins the Manhattan Project.

2. The fact that Oppenheimer is seen as the only big scientist in the development of the atomic bomb could be interpreted as an apology for being blacklisted * by Senator Joe McCarthy and President Eisenhower.

3. Many difficult decisions, which led to the success of the Manhattan Project, were made by General Leslie Groves, the military leader of the Project. The appointment of Oppenheimer as leading scientist at the bomb assembly laboratory in Los Alamos was a close decision.

4. Los Alamos was only the plant that put the bomb itself together and without the work of many other laboratories like the Chicago Group of which Enrico Fermi was a member and who built CP-1 † the Bomb wouldn’t have been possible. 5. Oppenheimer was only one leading scientist among a group of 5000 and even before the task of the atomic bomb was completed other physicists thought of advancements and in the case of Edward Teller even of the “Super”, the Hydrogen Bomb.

* Blacklisting: In the anti-Communist era un-American or anti-western oriented people, books and other

Committee on un-American Activities” to ‘save’ the world from communism.

“Science is not everything, but science is very beautiful”

the son of German immigrants in developed many theories about

New York City in 1904. His father came quantum mechanics in astronomy that to the United States at the age of led to later discoveries of neutron stars seventeen becoming a successful or black holes. During his whole lifetime, businessperson living in the fashionable he learned many languages like ancient Riverside Drive. Oppenheimer received Greek or Dutch just to read literature in his bachelor degree summa cum laude the original language or to give a speech at Harvard and went abroad to study at to foreigners. In California the leaders of Cambridge under Ernest Rutherford and the Manhattan Project found him and at Göttingen, Germany, where he offered to join the task.

earned his Ph.D. In Germany he came to

oppose fascism and in doing so became connected movement, as did many other and the entire nation or world was Americans in the 1930s. discussed. As mentioned he had friends After returning to the US in 1929, he and even family members involved in held positions at both the University of the communist movement of the thirties California, Berkley and at the California

Institute of Technology where he

the further development of the atomic and later

gathered a team of highly talented

and later. As Oppenheimer himself contribution to the United States that started to oppose further development ended the ten-year disgrace of of the atomic bomb and the hydrogen blacklisting. bomb he was suspected for treason and In my opinion the American people still brought to court in 1953. In this trial or felt guilty for this inquisition-like security hearing he was found “Not blacklisting of people to prevent the Guilty of Treason” but President country’s security towards communism Eisenhower and Senator McCarthy still with its suppressing of civil rights by insisted on blacklisting Oppenheimer so restricting people’s opinions. This could his Security Clearance was taken away be a reason to transfer a great part of and he was denied any government the honor of the success of the work. Scientists around the world Manhattan Project to Oppenheimer protested about this trial but without instead of mentioning all the other any effect on the government. This significant essential individuals that ended his influence on science policy in contributed. the later years. Consequently, most Americans Oppenheimer then held the academic mistakenly believe that Oppenheimer post of director of the Institute of was the only leader of the Manhattan Advanced Study at Princeton once held Project. However, the assigned leader by Albert Einstein, where he wrote much and the person who earns most of the about ethics and morality in science. In praise is General Leslie Groves.

1963, President Johnson awarded him e was chosen by Stimson, the AEC’s “Fermi Award” for his

Secretary of War, to lead the most that the Nazis already had further expensive and most energetic war effort developments and discoveries. He was ever. This project was expected to win the one who made the decision which method for producing fissionable * the war and control the world. Albert Einstein, a Jewish refugee from material was continued and further Germany and brilliant physicist, was developed. Whole new industries were urged by other scientist, among them invented to make the Bomb possible and was Niels Bohr who brought news that it was not only a challenge for the the Germans had been able to split the military but also for the big corporations atom, to write a letter to President like Chrysler and Du Pont to provide this Roosevelt to start the development of an amount of workers and scientists. atomic bomb. He mentioned, too, that General Groves was the man who the Nazis had already begun the selected the majority of the significant research, which later proved to be figures and companies in this Project. incorrect. However, this letter convinced Therefore, he gave the assignments to Roosevelt to act and establish the the Chicago Group including two Nobel-Manhattan Project with General Groves Awarded physicists, Enrico Fermi and as leading military authority.

* For starting a chain reaction, a certain amount

His attitude towards work and his

of radioactive sample is needed to keep the

employees only served the Project. His

fissionable samples but only a small amount of

made many participants aware of the

uranium is uranium-235 and plutonium has

urgency of the task as they still believed

never been seen before the success of CP-1

Arthur Compton and to Ernest Lawrence There were four considerable methods in San Francisco to produce fissionable to produce enough pure uranium-235 or material. And it was him who made the plutonium-239 to make a bomb out of it. decision to put Oppenheimer in charge One was based on the theory to let the of Los Alamos, the assembly plant uranium chain-react and produce a where the pieces of the actual bomb completely new element: plutonium that were put together. This decision was could be used for bomb production. All already threatened by Oppenheimer’s the other theories were based on communist background and many separating the lighter uranium-235 from people were against his appointment but the heavier uranium-238 by a centrifuge Groves pushed it through. If Groves method, a gaseous-diffusion method would not have admired Oppenheimer’s and an electromagnetic method. intellect right when he got his All these theoretical procedures have impression from him he would not have never been tried out before and now insisted on him as leading physicist in they had to be developed for industrial Los Alamos. use and production in these proportions.

ut still Los Alamos was only the Two of them were already dumped after plant where they worked on the several months and only the Chicago actual technique of exploding the Group with its reactor and Ernest O. material and as mentioned it was far Lawrence in San Francisco with his more difficult to get fissionable material. electromagnetic theory remained.

After many theoretical calculations and forecasts were right. Later a reactor predictions, the Chicago scientists under plant was constructed in Hanford, the leadership of Enrico Fermi started to Washington.

build their reactor secretly under the Meanwhile in the University of California stands of Stagg Field, the football at Berkeley Ernest Lawrence brought his stadium of the University of Chicago. idea forward. Accelerating the atoms Never before humans tried to let and conduct them into a curve, so that radioactive material chain-react and they the heavier atoms track a bigger radius faced many difficulties. For shielding the and end up in another collector than the actual reaction they used 99% pure lighter ones wasn’t a revolutionary new graphite piles and layered them up to idea but it was still a challenge. As the the ceiling and cadmium rods preserved fraction of uranium-235 was only 3-4% the reaction from starting. * On of the total, the amount of collected December 2, 1942, the first controlled sample was very small in the beginning. chain-reaction occurred and a source for The Berkeley scientists started with a plutonium-239, an element never seen device with a diameter of 34” but soon before, was found. Now that the reactor ended up with a 184” cyclotron in which was reality Fermi saw that all his the results became better and better. For these machines the largest magnets

* The chain-reaction is held alive by neutrons

ever had to be built and the costs got

getting free from split uranium atoms and

higher because copper as conductor for

splitting other atoms. When you hold cadmium

electricity was rare in the wartime and

in the middle it absorbs all the neutrons and the

as replacement General Groves had to reaction stops.

get a permit to use 6000 tons of silver mechanism to quickly bring together the from the national treasury as material. critical mass and let the explosion occur. These cyclotrons were now put onto an Teller and Stanislav Ulam, another industrial scale and a plant was built in physicist, even went further, started to Oak Ridge, Tennessee. make plans for the Super, the hydrogen

ow production of enough material bomb, and urged its development after for bombs was secured and the the war was over and the Soviet Union Los Alamos team could start was declared new enemy. Oppenheimer constructing the actual bomb. Here at was now one of the chairs of the AEC. the last step to success Oppenheimer He opposed the Super because he played a key role. He himself chose the thought that the atomic bomb was remote location of the laboratories in powerful enough. Because of this New Mexico because he knew that area opinion, Oppenheimer became martyr of from holiday trips to “get away from it the anti-Communist hysteria of the all”. Here he would gather several 1950s as it is mentioned in the hundred men to fulfill the task. Among beginning.

them were Edward Teller and, now n this report I don’t want to deny transferred from the completed any honor J. Robert Oppenheimer plutonium task, Enrico Fermi who got for his actual work. I think he contributed their knowledge and genius. contributed a lot to our new peaceful Together the group, General Groves post-Cold War world. He introduced once called them “the greatest collection ethics and morality to science and made of eggheads ever”, now invented a

every pioneer in knowledge responsible for the usage of his discoveries.

“The physicists have known sin; and this is a knowledge they

• Groueff, Stephane. “Manhattan Project: The Untold Story Of The Making Of The Atomic Bomb” Boston, Toronto: Little, Brown and Company, 1967