Analysis of the Landau Solution 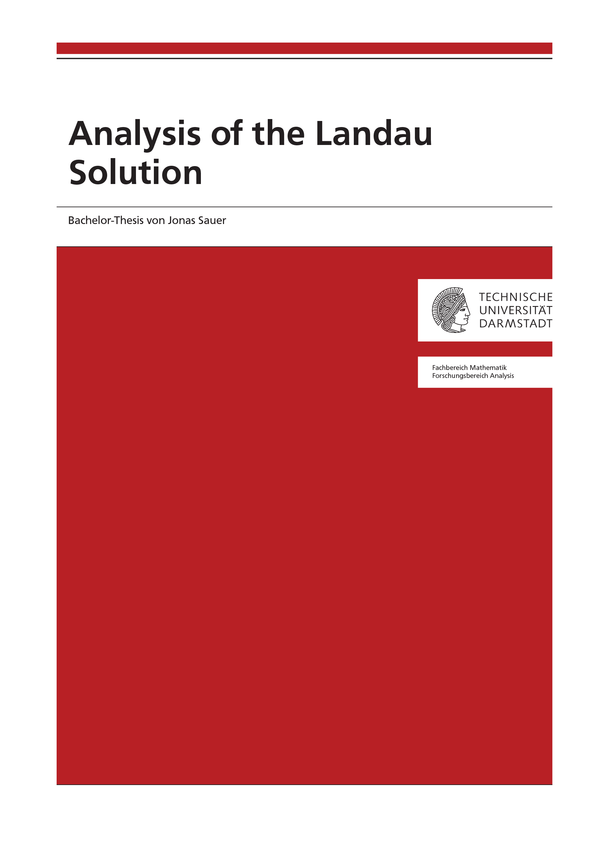 Analysis of the Landau Solution

Very special thanks to Prof. Dr. Farwig from the Technische Universität Darmstadt, who sparked my interest in the topic of this present paper and who provided a lot of helpful corrections and hints. I also want to thank Prof. RNDr. Josef Málek, CSc., DSc. from Univerzita Karlova v Praze for patronising me during my stay in Prague. 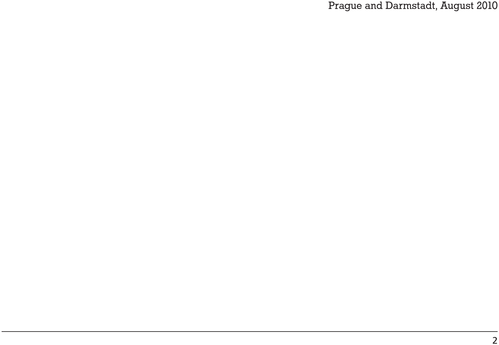 In 1944 Lev D. Landau [15] found a non-trivial solution to a stationary Navier-Stokes ﬂow on 3 \{0}, which was symmetric around some axis and fulﬁlled the condition, that the velocity decayed linearly and the pressure quadratically in |x|. If the axis of symmetry is the x 3 -axis, the solution is of the form

where d ∈ (−1, 1). We note here, that Squire [19] found this solution independently in 1951. Landau was examinating this ﬂow model when considering the following physical experiment. Imagine a thin pipe in a ﬂuid without any boundary conditions. The ﬂuid is driven by a small jet outﬂowing the pipe. If one looks at the limit case, where the diameter of the pipe shrinks to zero, there is no force acting on the

ﬂuid on 3 \{0}. Nevertheless, if one wants to describe the physical behaviour of the ﬂuid completely, one has to take into account the force acting at the origin, i.e. at the oriﬁce of the pipe. Therefore, one

has to extend the solution in a suitable manner to the whole space 3 . This can be done if one admits also weak solutions in the space of distributions which satisfy

where b is a vector and δ is the Dirac distribution.

When looking at the solutions found by Landau, it seems quite natural to ask, if there are also reasonable physical interpretations for the case |d| ≥ 1. Therefore we ﬁrst derive Landau’s solution with the assumptions posed in the beginning, following an ansatz by Batchelor [3]. From there it will be clear, that the velocity is unbounded on a cone, if |d| > 1. As it turns out, such a modiﬁed Landau solution is no longer a solution to a Navier-Stokes system - clearly not in the classical, but as well neither in the weak nor very

physically reasonable interpretation can be given in the whole space 3 . In any case, one can consider modiﬁed Landau solutions to be solutions in certain subsets of 3 , where they yield some interesting streamline plots, which are also provided in this thesis. Furthermore, we give an overview over known results concerning the Landau solution.

In this paper we will use some common notation. Ω usually denotes an open subset of 3 . For the space of k-times continuously differentiable functions from Ω to n we write C k (Ω, n ). Furthermore we set C k (Ω, ) = C k (Ω) and analogously for the other spaces introduced here. We will also not distinguish

port, i.e. the test functions, will be denoted by C ∞

(Ω) is the space of distributions. L p (Ω) is the Lebesgue space of p-integrable functions and W k,p (Ω) is the Sobolev space of k-times weakly differentiable p-integrable functions, whose derivatives are also p- integrable.The subscript loc indicates, that the functions need to be p-integrable only on every compact subset of Ω. A ball around the origin with radius R will be denoted by B R . Due to the concepts dealt with in this paper, we will also use some notation from ﬂuid dynamics. The tensor product of two vectors a and b is the 3 × 3-matrix a ⊗ b := (a i b j ) i j . The Cauchy stress tensor will be denoted by T = −p + ∇u +(∇u) T . Note that the momentum ﬂux density tensor is given by u ⊗ u − T . The reader should note, that throughout this paper we will work without explicitly taking the dimension of physical quantities into account. Furthermore we set for the density of the ﬂuid ρ = 1. Except for the solution u and the position vector x, vectors in 3 and vector-valued functions will be denoted by a bold face letter.

When speaking about distributions, the angled brackets denote the action of a distribution on a test

f , ϕ means, that the distribution f is acting on the test function ϕ. Unless explicitly said function, i.e.

otherwise, the symbol δ will always represent the Dirac distribution.

In the appendix the reader may ﬁnd some basic theorems used in this paper. We usually refrain from referring explicitly to the theorems provided in the appendix, as they are mostly well-known and only meant for the convenience of the reader.

As we will be concerned with different kinds of solutions to a Navier-Stokes system, we ﬁrst have to introduce the setup we are working with.

Following the usual procedures in ﬂuid dynamics, we will work with quantities such as the velocity u or the pressure p in order to describe certain ﬂows. These quantities are functions of space and time, that is their domain is

where Ω t is the (open) domain occupied by the ﬂuid at time t. We will assume, that is open. A sufﬁcient condition for this is, that Ω t changes continuously in time. In fact, we will be only considering the situation, where Ω t = Ω will be constant. Nevertheless, in this section we will state the main results with explicitly taking the change in time into account.

Our mathematical model will treat ﬂuids as a continuum, and our fundamental hypothesis is, that exactly one ﬂuid particle passes through any point x ∈ Ω at any time t ∈ (0, T ).

That gives rise to some results laid out in this section. The ﬁrst is the Transport Theorem, which is of utmost importance. Let us consider a system of ﬂuid particles in a bounded domain (t) ⊂ Ω t at a time t. It is well known, that for given velocity u ∈ C 1 ( ), the initial value problem

∂ ϕ has a unique maximal solution x(t) = ϕ(X , t 0 ; t), where ϕ has continuous ﬁrst derivatives and both

deﬁnes the change of the domain (t) with time

We are now ready to state the assertion of the Transport Theorem.

Proof. Observe, that there exists an interval (t 1 , t 2 ) containing t 0 , such that ϕ and J satisfy the conditions of the theorem, see for example [10]. Then, by the Change of Variable Formula, we get

If one calls the integrand appearing in the right integral F (X , t), we see that for all t it holds that F is measurable as a function of X and that it has ﬁnite derivatives for almost every X ∈ ∈ (t 0 ). Furthermore, the time derivatives of F are bounded by an integrable majorizing function g and there exists t ∗ ∈ (t 1 , t 2 )

such that F (X , t ∗ ) is integrable. We therefore get by the theorem on differentiation of an integral with

Please observe, that we omitted the arguments here and that we used the well-known relation ∇F · u + F div u = div (Fu).

Let ρ : → (0, ∞) denote the density of the ﬂuid. Then by the conservation law of mass and by the Transport Theorem, we get ∂ ρ

for all control volumes (t) ⊂ (t) ⊂ Ω t . By the continuity of the integrand we thus conclude

This equation is known as the continuity equation. In the steady-state situation, that is, if all time derivatives vanish, this simpliﬁes to div (ρu) = 0. Throughout this paper we will only be concerned with the case, where the density is constant also with respect to the spatial components, i.e. with incompressible ﬂows. Obviously, in that case the conservation law of mass is turned into the statement

So we see, that there is no ﬂux of mass across any closed surface for incompressible ﬂuids, or in other words: At any time and for any control volume, the inward ﬂow equals the outward ﬂow. In the same manner one can examine the conservation law of momentum. Recall that the force is deﬁned as the time derivative of the momentum. Thus, for the total force F acting on a domain (t) ∈ Ω t , we have the relation

But on the other hand, for Newtonian ﬂuids we can decompose the total force F into the volume force and the surface force by virtue of its density f and the Cauchy stress tensor T

Observe, that we have the two relations

We use here the convention

This leads in the stationary case, i.e. div u = 0 to the Navier-Stokes equation

Usually we refer to the system of equations

as the Navier-Stokes system with force f .

2.3 Concepts of a solution

In the classical work frame, we are usually interested in solutions to partial differential equations, which are at least as smooth as the degree of the equation. This concept of a solution turns out to be not suitable for certain applications. There we have to use a more general deﬁnition of a solution to a partial differential equation, which will allow us to give a physical interpretation to certain equations. First let us state the classical deﬁnition.

As already mentioned, this concept of a solution to partial differential equations is not always an appropriate approach. There are various concepts of solutions, but we will state here two deﬁnitions, which we will be needing when analysing the behaviour of the Landau solution.

This deﬁnition extends in an obvious way to solutions to partial differential equations in multiple functions.

Observe, that for distributions we have the deﬁnition

function f is in L 1

Especially for the case of the Navier-Stokes system, we may consider the concept of a very weak solution

in the following sense. For this deﬁnition we have to recall, that if Ω ⊂ 3 is bounded, then L 1 (Ω) ⊃

Note that due the special properties of ϕ, namely div ϕ = 0, we do not have to take the pressure p of the original Navier-Stokes equation into account.

3 Analysis of the classical case