Recently, magnetic ﬁelds in galaxy clusters have come to the attention of the scientiﬁc world as the largest-scale magnetic structures measured to the present date. While little is known about the origin of these ﬁelds and their evolution throughout cosmic time, the presence of large-scale magnetic ﬁelds may have important implications for the processes observed in galaxy clusters. Examples of these implications include inhibition of transport processes - such as heat conduction, spatial mixing of the gas, and the propagation of cosmic rays - or even dynamical importance through the Lorentz force and the additional magnetic pressure term. It is therefore of great scientiﬁc importance to determine the origin, evolution and structure of cluster magnetic ﬁelds and their relevance in structure formation and in astrophysical phenomena observed today in galaxy clusters.

Clusters of galaxies are the largest gravitationally bound systems in the Universe. They can be recognized in the optical range as groups of galaxies which are located closer together than the average distribution. However, galaxies represent only around 5% of the total mass of a typical cluster. Most of the baryonic mass, roughly 20% of the total mass of the cluster, is contained in the form of hot ionized gas in the intracluster medium (ICM). The ICM is characterized by high temperatures (in the order of 10 8 K) and electron number densities in the range of 10 −3 cm −3 ; thermal bremsstrahlung emission from the hot gas in the intracluster medium is very intense in the X-ray spectrum, typical luminosities ranging between 10 43 − 10 46 erg/s. By far the largest contribution to the mass of galaxy clusters is the dark matter, which constitutes between 70-80% of the total mass and plays an important role in the development of the clusters. According to the model of hierarchical structure formation, clusters of galaxies are thought to form upon the gravitational merger of smaller units, such as groups and subclusters.

1.2 Theories Regarding the Origin of Cluster Magnetic

Our Universe is permeated by magnetic ﬁelds on diﬀerent length scales and strengths. The most palpable example is our own planet, which has a magnetic ﬁeld of about 0.5 G at its surface. Moreover, the magnetic activity of our Sun also aﬀects life on Earth. Magnetic ﬁelds in the Sun are about 10 G at the poles and can reach up to 2000 G in sunspots. Magnetic ﬁelds have been measured in the intraplanetary medium (≃ 50µG), in protostars and neutron stars, in the intragalactic medium (≃ 5µG in the Milky Way). It comes as no surprise

Apart from the questions posed towards the origin of the cluster magnetic ﬁelds, another important scientiﬁc research area regards their currently observable properties. There are three diﬀerent methods which can be employed in order to determine the strengths of magnetic ﬁelds in the ICM.

Another method employed to measure the average magnetic ﬁeld strength in clusters uses Inverse Compton (IC) radiation luminosities in addition to synchrotron emission. The inverse Compton eﬀect consists in the scattering of microwave background photons by the relativistic electron population. As a result, the microwave background photons gain momentum from the electrons and are turned into X-ray or gamma photons. Given that the IC and synchrotron radiations both originate from the same relativistic electron population, one arrives at a proportionality relation: Lsync ∝ u B , where both the

The Faraday rotation eﬀect completes the set of methods currently used to measure cluster magnetic ﬁelds. The principle of this eﬀect consists in the

Compared to synchrotron and IC measurements, Faraday rotation map analyses give magnetic ﬁelds which are roughly one order of magnitude larger. Several arguments can be invoked in order to explain this discrepancy. Firstly, the cluster magnetic ﬁeld may show a range of coherence scales, and the presence of highly correlated small-scale ﬂuctuations can enhance the rotation measures and thus produce higher estimates of the average ﬁeld strength. Secondly, an anisotropic pitch-angle distribution would weaken the synchrotron radiation relative to the IC emission, leading to an underestimation of the IC-derived ﬁelds. Also, if a large relativistic population is located in the weak-ﬁeld regions, a large part of the IC emission will come from low magnetic ﬁeld-strength parts of the cluster.

The scientiﬁc debate regarding the calculation of magnetic ﬁelds from rotation maps has become increasingly intense as new methods of analyzing RM maps are being developed. As discussed by Rudnick [2], the evidence up to date is insuﬃcient to prove the fact that the rotation measures are due to the ICM and not to a thin thermal skin mixed with the relativistic plasma of the emitting radio source. Moreover, Rudnick cites polarization percentages of 0.9±0.7 and 0.9 ± 1.0 in beams which were used to produce rotation maps, an uncertainty which is too large for the results to still be considered relevant. Analyzing the rotation map of the Coma cluster by removing sources embedded in the cluster and keeping only the rotation measures of background sources, Rudnick found that this cluster showed, within error limits, a zero averaged absolute value of the rotation measure, even close to the cluster center. Counterarguments in favor of cluster magnetic ﬁeld-generated rotation maps are presented in a study by Clarke et. al. [1] who performed a statistical survey of rotation measures as a function of the impact parameter of the emitting source with respect to the cluster center. A clear broadening of the RM distribuion toward small impact parameters (below roughly 1 Mpc) was found, justifying the conclusion that rotation maps are due to the ICM rather than being intrinsic to the emitting source.

1.3.6 Improved methods to determine the magnetic ﬁelds from rotation maps

Recently, Enßlin and Vogt ([5], [6]) developed a method of analysing Faraday rotation maps which enabled them to use the RM of Hydra A to calculate the magnetic ﬁeld of 7 ± 2µG at the cluster center, within the assumptions made about the most likely geometry of the ﬁeld.

In the ﬁrst stage, Vogt and Enßlin [6] assume an isotropically distributed

than the beamsize (distance between two adjacent measurements in the RM map). Combining these two eﬀects, the reliable part of the computed spectrum encompasses roughly one order of magnitude in k-space. 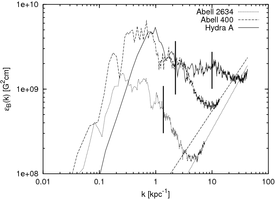 Figure 3: Magnetic energy spectra computed by Vogt and Ensslin from observational data. The Fourier transformed beam sizes are represented by thick vertical lines. The other straight lines correspond to the increase in the energy density for the largest k

In the second stage of developing the method described above, Vogt and Enßlin [5] describe a maximum likelihood analysis of Faraday rotation measures which enables them to conclude a Kolmogorov-like power spectrum of the magnetic energy over at least one order of magnitude in k-space.

Several numerical simulations have been employed in order to model the evolution of magnetic ﬁelds with cosmic time and probe the theories postulating diﬀerent origins of the ﬁelds, as well as determine the mechanisms by which the ﬁelds are ampliﬁed to the present value. In 1997, Kulsrud et. al. [7] employed the Biermann battery model in a hydrodynamic simulation including the magnetic ﬁelds passively (that is, neglecting dynamical importance of the magnetic ﬁelds for the gas) and found that in the protogalactic era the ﬁelds can be ampliﬁed from 0 to 10 −21 G. Following the phase where the Biermann battery appears as an important gener-ator of ﬁelds, the simulation by Kulsrud et. al. suggests further ampliﬁcation of the ﬁelds by isotropic Kolmogorov turbulence associated with gravitational structure formation. However, due to the low resolution, the small turbulent scales could not be resolved therefore the computations were done using a simpliﬁed analytical model. Results of analytical calculation suggest a signiﬁcant

strongly ampliﬁed than what would be expected from simple compression (in which case we expect B ∝ ρ 2/3 ), which constitutes the eﬀect of shear ﬂows. In the same study, correlation lengths of the magnetic ﬁeld were computed using an autocorrelation function similar to that described in [6]. Typical values were found between 46.1 and 62.6 kpc, roughly one order of magnitude larger than those discusses by Enßlin and Vogt [6] from observation data. The power spectra computed for the magnetic ﬁeld followed a linear proﬁle from which the power spectrum was determined between -2.3 and -3.1, much lower than expected from Kolmogorov turbulence (-5/3). The artiﬁcial rotation maps however seemed to correlate very well with current observations. One other important fact noted by Dolag et.al. is the large inﬂuence of cluster mergers which contribute signiﬁcantly to increasing the cluster magnetic ﬁelds. The approximation of smoothed particle hydrodynamics is however believed not to be well-suited for resolving shocks and therefore cannot accurately describe cluster mergers. The purpose of the current study is thus to use an adaptive mesh-reﬁnement (AMR) simulation, whose performance in terms of resolving shocks and cluster mergers is improved, and to compare the results with those from observational data and previous numerical models.

As described by the Friedman-Robertson-Walker metric, the universe is ex-panding, and the rate of expansion is variable in time. In cosmology the concept of ”comoving coordinates” has been introduced in order to account for this expansion. The real (spatial) coordinates are related to the comoving coordinates by

The time-derivative of x is called ”peculiar velocity” and is not due to cosmic expansion but to the interaction between individual astrophysical objects. The Hubble constant is deﬁned from observations as v/r = H where v is the receding speed of a galaxy at distance r from the Earth. Taking the derivative of 14 and neglecting peculiar velocities with respect to cosmic expansion rates we ﬁnd v = d r/dt = a ˙ x + ˙ a x ≈ ˙ a x, thus the Hubble parameter in dependence of time reads.

The Friedman equation is the ﬁrst of six equations which we will employ in order to solve for the cosmic evolution of the galaxy cluster. It relates the

time-dependent Hubble parameter to density distributions in the universe:

where Ω m , Ω r , Ω Λ , and Ω c are the present-day densities, respectively, of matter, radiation, cosmological constant and curvature divided by the critical total density which would result in a ﬂat Universe.

The other ﬁve equations needed are the Poisson equation and the four MHD equations (continuity equation, momentum conservation, energy conservation and magnetic ﬁeld evolution). In order to use the above named equations, we must ﬁrst transform them to comoving coordinates. For this, we deﬁne comoving quantities in terms of the real quantities scaled by a conveniently chosen power of the scale factor a. A summary of scaled comoving quantities as a function of the real-space quantities (denoted with the upper index ∗) is given in 18 below.

Here, ρ represents the gas density, v the velocity, p the pressure, B the

magnetic ﬁeld vector, and ε the internal energy deﬁned as